Why Does The Leftywhore Media Romanticize Criminals?


One thing about the Sunday Left Angeles Times is that it almost writes a post in and of itself on unbelievable Leftywhore media bias.
Today's case in point is this front-page story on former Black Panther Pete O'Neal.
Now If one just looks at the photos, we see this dread locked old dude that surrounds himself with orphaned children. Children that he has taken care of.
Now that is the nice picture the writer, Christopher Goffard, wants to present.
But let's get to the heart of the real story.
Mr. O'Neal is a criminal that has evaded American justice for nearly 40 years.
Mr. O'Neal was convicted transporting a shotgun across state lines and was sentenced to four years in prison. And while out on bail, keep in mind he was already convicted, Mr. O'Neal and his wife, Charlotte, decided to get out of Dodge. And that was by way of Sweden and Algeria and eventually to his current home in Tanzania.
The head line of the story implies something different:

I highlight exile because the implication is that the United States exiled Mr. O'Neal to Tanzania. Nothing could be further from the truth. Mr. O'Neal jumped bail and is on the run of his own doing. He has chosen to live in a self-imposed exile. That should have been the headline.
Now keep this in mind.
The Black Panthers were some seriously bad dudes and gals. They wanted to begin "Black Liberation". In other words, they hated Whitey and all that they believed that Whitey stood for. They wanted not desegregation and all people to be treated equally, with respect. Not based on skin color but character. Nope, they wanted to kill Whitey and set up a Black, socialist utopia.
And Mr. O'Neal, himself a troubled youth, was the perfect kind of bad dude these people wanted.
The article implies that Mr. O'Neal has mellowed over the years. I suppose he has.
The article points out that he is embarrassed at the radical and the rhetoric he once employed. Yet he is not sorry for what he was trying to do.
In the meantime, the socialist, Maoist, whatever left-wing doctrine they were trying to figure out seems to have in a sense left Mr. O'Neal.
Mr. O'Neal owns four-acres in this rugged part of Tanzania. He even has modern conveniences such as television and a computer.
Yet the nagging thing is why Mr. O'Neal simply does not come back to the United States now? He probably would not serve a day in jail. A 40-year conviction on transporting a shotgun across state lines is hardly the thing one flees the United States and stays away for 40 years.
I believe it is in this statement he makes in the article:


For his radicalism itself, however, he won't apologize, even if — as he suspects — it is the one thing that might gain him safe entry back into the States.

"They will never convince me in my life," he says, "that what I was doing wasn't right."

Well, I won't try to convince you. But I will not celebrate you either.
One way that Mr. O'Neal earns a buck, or a Tanzanian Schilling, is hosting American high school students and regaling in the tales of his Black Panther days. I kid you not. Look at this photo of awe-struck students. 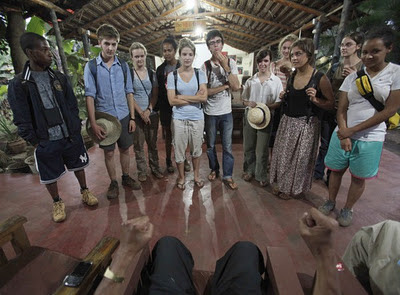 These young minds full of mush are allowed to go by parents, fork out $30 to spend the night and hear a boatload of propaganda. And they are lapping it up.
I do not get it.
Why would sane parents let their kids travel around the world to meet a guy that has such hatred for their nation? That at one time believed the White man was so evil that they had to be killed? And that almost all the students are. . .White?
But that is the whole problem with this article.
The result is that most people would feel sorry for this dude.
I do not.
I think that he should have come back long ago, either fought the charges or take the punishment. Or hope that there would be a compromise of sorts.
But, Pete O'Neal is a true-believer to the end. And that is nothing to celebrate but to mourn. For what he believes is in a fairy-tale. Socialism is a fairy-tale.