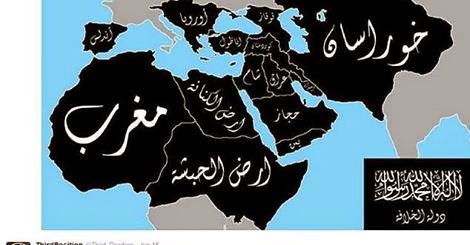 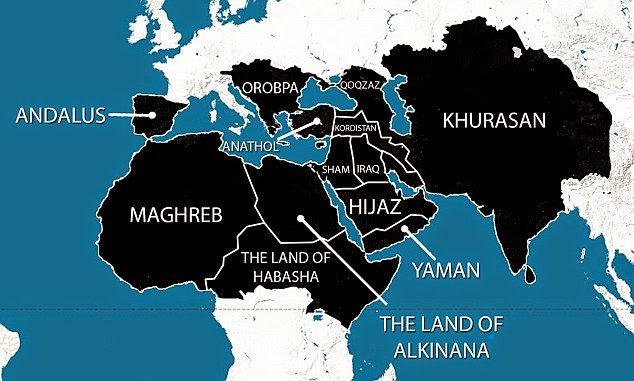 The above maps are a restoration of the Sunni Islamic Caliphate of the 7th century.
In the linked article, The Islamic State wants the map to be a reality within the next five years.
I suppose that many if not most of the brain trust in the Western world pretty much dismisses all of this as wishful thinking.
But these are the same people that did not see the rise of ISIS in the first place and how they all but became the dominant force in the Syrian civil war. And with their power expanded that war directly into Northern Iraq with little to any resistance. This is the current area under control of The Islamic State. 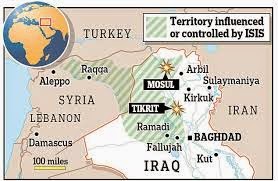 I do not know about you, but this is a very wide area under control of what we have been told is but a rag-tag army of maybe 10,000 men. And consider that as the Iraq army in Northern Iraq essentially turned tail and ran, The Islamic State obtained a lot of hardware including many, many American arms including HumVees and tanks and possibly fighter planes, and most important, new recruits.
When one puts all of that together, it does show the above caliphate map to be as The Daily Mail wrote, Chilling.
Maybe The Islamic State picked their battle in the weakest areas of the Middle East and by doing so are stronger than they appear.
But then what about this parade of the spoils of war? Does anyone think that The Islamic State does not have some people knowledgeable enough to use a SCUD missile? And forget that they would only be happy to do what Saddam Hussein did during the First Gulf War and lob some to Israel. They would be more than glad to use them against Shi'a fighters in Iraq. Needless to say that they also are freshly gaining conventional weaponry as well.
Make no mistake about this.
The Islamic State will make trouble around the region beyond what they control. They will try to undermine Jordan, Saudi Arabia and the rest of the Arabian peninsula. They will then try to wrest control of Lebanon from the Shi'a, Syrian and Hezbollah influence. At this writing, Lebanon has the largest Christian population in the region. If The Islamic State takes over, they will flee as fast as the Iraqi Christians are doing today.
But, as is wont of many Americans, there is a substantial minority that would like to bury it's collective head in the sand and retreat to a semi-Fortress America. While most of those who would, essentially, like to do nothing, are on the left, there is a substantial number of libertarians and yes, some conservatives that want us out of the region entirely. Many believe that the United States is simply blindly following an "Israeli" foreign policy. That if the United States was not so enamored with Israel, we might even get some love from those that are now our enemies.
Sadly, this is where they are wrong.
This radical Islamic hate for anything non-Islamic precedes the founding and, before that, settling of the United States. As the United States has developed and became the world's superpower, radical Islam sees the United States as a threat period. The nation's third president, Thomas Jefferson, had the first encounter with Islamics in Tripoli and this quote is worth reading. Pretty current, isn't it?
And as far as Israel goes, let me point out something that I have said before with this caveat. What I have said is actually happening before my scenario. If tomorrow, Israel ceased to exist for whatever reason, after the two minutes of joy among all of its enemies in the Arab, radical Islamic world, they would turn their guns on each other. That is what we are seeing now in Syria, Northern Iraq and between Sunni and Shi'a and everything else in between. There is even hope against hope among some that current allies of The Islamic State will turn against them because of their strict interpretation of Islam.
This the radical Islamic figures that eventually, they will just wear down those opposed to it. It may be on it's way in Western Europe. However there are people waking up to the real threat. Note that the map of The Islamic State goes to the. . .Gates of Vienna. That is why they fight. That is why they show the brutality. That is why they propagate fear to wear down opposition. Maybe this is why the army in Northern Iraq fled. They just are tired of fighting. Being that the current Iraq army is pretty corrupt (and the biggest mistake Team Bush made, disbanding the Iraqi army after ousting Saddam.)
and they are defending a predominantly Sunni area, many thought better to defend their Shi'a brethren in Baghdad and the south of the country than people in the north.
We in the United States have to take this The Islamic State seriously. The fact that they have such a wide swath of territory and are bold enough to proclaim their new caliphate is a serious matter. If they didn't have advanced weapons of war, they sure as hell do now with the retreat of the Iraqi army and leaving behind advanced American weaponry.
The caliphate has been revealed and the protagonists believe they can fulfill their dream in five years or less. The job of the West is not just to contain that threat but to defeat it.
﻿
Posted by Righty64 at 1:56 PM No comments: Links to this post