Yesterday was the Patriot Day 2010 rally in South Pasadena that I wrote about on Friday's post.
It was a great event as hundreds gathered to celebrate the United States, remember those that died on 9/11/2001 and yes, to hear a little speech making by the local congressional candidate and state assembly candidate.
Mrs. Right View From The Left Coast and I arrived around the noon hour and the event was in full swing. Unfortunately, we missed John Colbert's address to the crowd. But as you will see later, your humble blogger did speak with him one-on-one. Very exciting to think that I was able to speak to the next congressman from the California 29th congressional district.
The event was a lot of fun as there was food and a great band covering some great old rock music.
The following are some photos from the event. 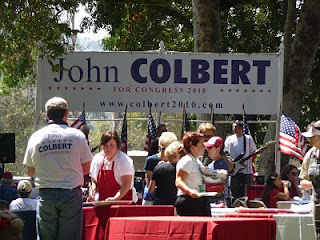 This is a shot of the crowd. It does not seem like a lot of people, but I got just a little too close. 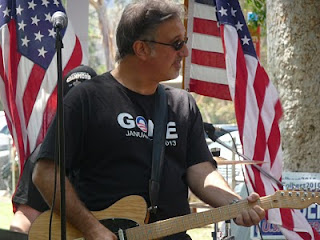 You have got to love the shirt the lead guitarist/vocalist is wearing. Mocking the Obama logo it says: GONE January 20, 2013. My sentiments exactly. 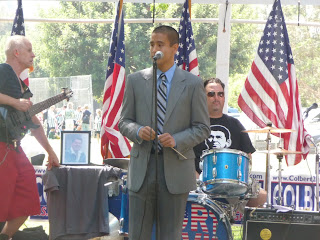 Above is the Republican candidate for the California state assembly district 44, Alvaro Day. He is great, young and very energetic. This is one young man that will be going places in California Republican politics. 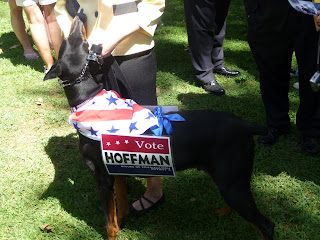 WOW! This election is really going to the dogs! This is Shaun Hoffman's pooch. He is running for the California Board of Equalization, the tax board, in the fourth district. He has a very longshot campaign, but hey this election the longshots maybe the ones that pull off the wins. Which here will be good for us conservatives and Republicans. 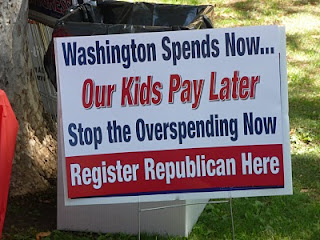 A lot of people looked like they took the opportunity to register to vote. This area was very busy. This is the kind of grassroots effort it is going to take to bring change not just to Washington, D. C., but Sacramento as well. 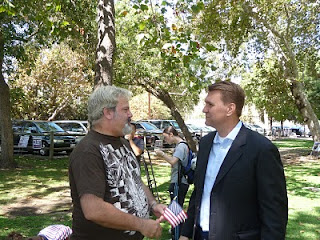 Above is your humble blogger speaking with the next congressman from the California 29th congressional district, John Colbert. I asked Mr. Colbert if the current congresscrook, Adam Schiff was going to debate him. He did say that there is a debate scheduled but that he is not sure Mr. Schiff would even show up. I also asked how the campaign is going and he was really excited. He commented on the large crowd that showed up and said that he had never seen people as energized on our side as we are now. I thanked him for running and mentioned my endorsement of his candidacy.
Folks, here in California the primaries are long over and the battles are in full force. The conservative Republican side is fired up and looking for some big wins in November. I believe in these candidates and that they do have a great chance to win their respective races. So take an opportunity to visit their websites. Give some money or time or both. As noted, the energy is on our side. Lets keep it going until November 2!